Book Review: A is for Arsenic: The Poisons of Agatha Christie 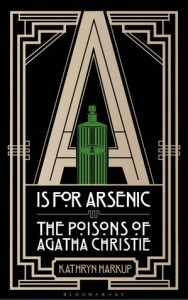 Book: A is for Arsenic, The Poisons of Agatha Christie

Summary: Agatha Christie reveled in the use of poison to kill off unfortunate victims in her books; indeed, she employed it more than any other murder method, with the poison itself often being a central part of the novel. Her choice of deadly substances was far from random - the characteristics of each often provide vital clues to the discovery of the murderer. With gunshots or stabbings the cause of death is obvious, but this is not the case with poisons. How is it that some compounds prove so deadly, and in such tiny amounts? Christie's extensive chemical knowledge provides the backdrop for A is for Arsenic, in which Kathryn Harkup investigates the poisons used by the murderer in fourteen classic Agatha Christie mysteries. It looks at why certain chemicals kill, how they interact with the body, the cases that may have inspired Christie, and the feasibility of obtaining, administering and detecting these poisons, both at the time the novel was written and today. A is for Arsenic is a celebration of the use of science by the undisputed Queen of Crime. -Bloomsbury Sigma, 2015.

I went into this book excited because it's not just the murder mystery aspect, but the chemistry aspect as well. The way poison affects the body fascinates me - not in a morbid sense, just regular curiosity. I was not disappointed.

I do have a few warnings though. The first one concerns the chemistry: if you haven't studied chemistry, I wouldn't recommend this book. She goes deep into the chemistry of the poisons and explains very little other than the more complicated compounds and chemicals. You'd have to look up a lot of information in order to understand everything and how it relates to the poisons. It also may be good if you had a little knowledge of biology as well. Harkup loves her chemistry so be prepared if you decide to read this.

The second warning is that I would read and/or watch Agatha Christie's work before reading this. While Harkup does her best to not spoil everything, she does spoil the murder weapons and how the culprit administers said murder weapon. If that's something that matters to you, don't read this. She does spoil the plot of two or three of the stories, but she warns you beforehand in case you haven't read the stories mentioned in the book.

She breaks up each poison by focusing on an Agatha Christie story that features said poison. She tells you what the poison looks like, then gives the history of the poison and how it kills. She also explains any real life murders using the poison and finishes the chapter by talking about the poison in relation to Christie's stories.

As a Christie lover, I really enjoyed this book. It enhances and deepens the stories so I can better appreciate (and shudder) at the methods the culprits used to dispatch their victims. I'm really glad I read it. I highly recommend it to Christie fans.

The only things I didn't like were her mildly spoiling the stories and that she got a detail of one of the stories wrong. She used the adaptation's plot point rather than the novel's plot point. These are minor problems to me since I'm very familiar with the stories, but they could be major for anyone who hasn't read the majority of Christie's canon.

Overall, I give A is for Arsenic: The Poisons of Agatha Christie an A+.