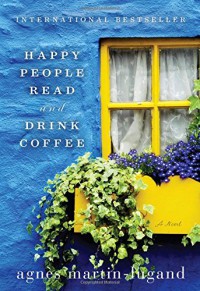 Summary: Diane seems to have the perfect life. She is a wife, a mother, and the owner of Happy People Read and Drink Coffee, a cozy literary cafe in Paris. But when she suddenly loses her beloved husband and daughter in a car accident, the world as she knows it instantly vanishes. Trapped and haunted by her memories, Diane retreats from friends and family, unable and unwilling to move forward. But one year later, Diane shocks her loved ones with her surprising decision to move to a small town on the Irish coast. Finally determined to rebuild her life, Diane's new home is all quiet and comfort - until she meets Edward, the attractive yet taciturn Irish photographer who lives next door. Abrasive and unwelcoming, Edward resents Diane's intrusion into his life of solitude. Diane wants nothing more than to heal in peace, but her neighbor's gruff manner provokes her. Can their standoff bear the weight of an undeniable attraction? At once heartbreaking and uplifting, Diane's story is deeply felt, reminding us that love remembered is love enduring. - Weinstein Books, 2016

I have to say, I find myself at a loss to discuss this book. This is because it's one of the most poorly written books I've ever read. I should've been suspicious when I compared the plot summary to the amount of pages in the actual novel (224 for this version). Unless the timing of the novel was changed, there was no way a story like this could be told in 224 pages. The book is translated from French, so I'm not sure which is the greater sin - the novel or the translation of the novel.

It reads like an elementary school fiction project. It's a giant run-on novel. Spaces between paragraphs are so few the reader doesn't have time to process what is happening. In the space of three sentences, the reader can go from being in present day France to the day of Diane's husband and daughter's funeral with absolutely no mark or indication that the reader has changed time and location. The reader must figure out where and when they are in the novel on their own. Readers go from Diane deciding to go to Ireland to her being in Ireland in a period of two sentences.

All of the characters are stereotypes - the manic depressive widow whose heart is healed by a brooding Irishman attuned to nature. Her best friend is the sassy, promiscuous gay friend caricature. That's not flattering. Her parents are cold and unfeeling; only caring about how others perceive them. Why? It's never explained. A deus ex-machina character is introduced to force things to a crisis between Diane and Edward not even a full three paragraphs after they've. . . kinda decided they love each other? There's no explicit exchange of feelings and only one or two kisses so who knows.

I won't drag this out. It's a bad book and I'm stunned that it was published, let alone translated. Who knows? Maybe the original French version is better and it's just a terrible translation. Either way, please don't read this. You'll be better off for it.

I give Happy People Read and Drink Coffee a D-.

Like I said, I can't recommend this book. If you still want to read it, save your money and borrow it from the library.